Between theory and practice

One of the hardest things to do is to pretend weather conditions are excellent when you have just been caught in a downpour. Not unlike the recently released US inflation rate, the highest in 40 years, that even the most pessimistic economist had not even remotely predicted: 4.2%. It was a pity that the inflation figure adjusted for energy and food prices, was equally disappointing and came in at 3%. That was early May. And now the German (2.3%), Italian and Spanish inflation figures are also rising, albeit much less quickly than in the US.

Financial markets were shocked at the beginning of May and temporarily went from “risk on” to “risk off”. The interest sensitive tech sector in particular saw profit taking. Sentiment in the crypto markets also took a hit.

Would not things be going too fast after all, with money growth and massive government spending? Is not the rapid recovery turning into the threat of an overstrained situation, as we already see in the transport sector, with computer chips and commodity prices?

Central bankers, especially the two lawyers Powell and Lagarde, deny any knowledge: “No, this is all temporary, soon inflation figures will just fall back, because our inflation expectations remain low and anchored”, it was firmly claimed. And they saw no reason to adjust the generous monetary policy and the extremely low interest rates.

That is reasoning from an ivory tower, in a study, with clever mathematical models which may well be true, but economics is not an exact science. Because what does reality look like on the ground, where products for world markets are assembled? In China, the factory of the world, where people are most severely confronted with the massive rise in raw material prices? Copper and iron have doubled in price in the past year. Prices for wood have gone through the roof. The Chinese will have to raise their prices, otherwise they will have to carry losses. And these more expensive goods are then shipped in containers to the US and Europe. Containers, whose transport costs have also increased sharply. 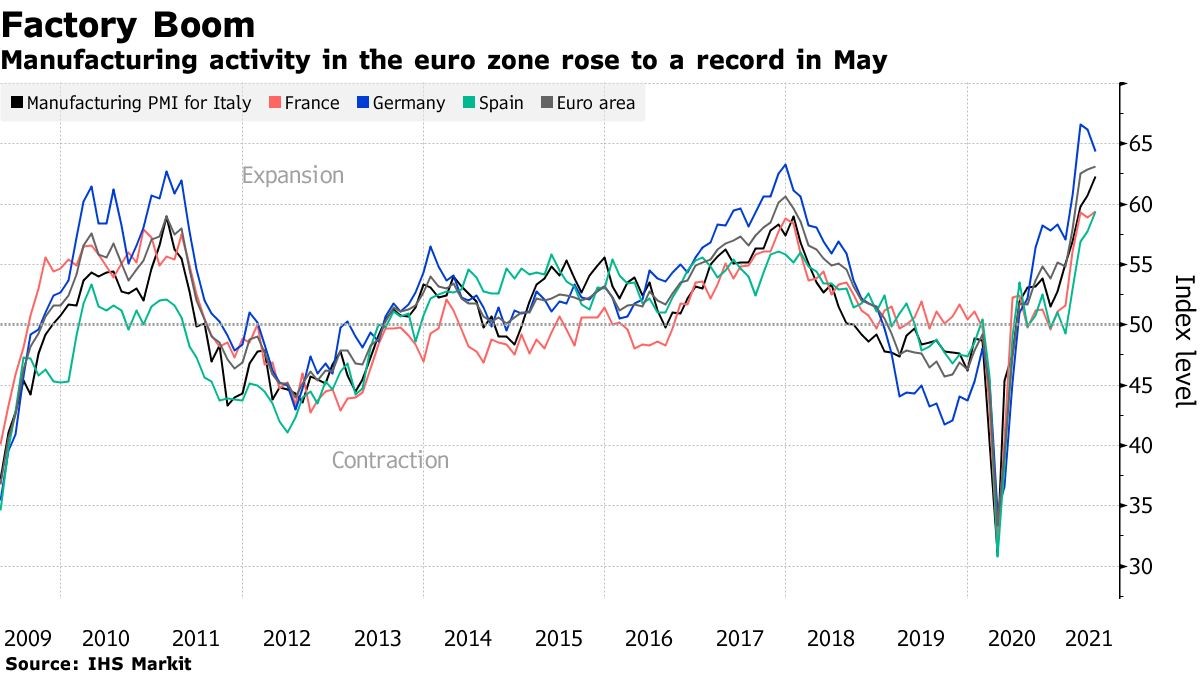 European and American importers are consequently going to pass these price increases on to their customers, shops and consumers. It will take some time, but it seems inevitable. On Tuesday, IHS Markit published the highest increase in output prices (of products leaving the factory) in Europe in 18 years. All this combined with major purchasing activity (see chart above) and a sharp fall in inventories.

SHV, a Dutch multinational, thinks inflation will stabilize at around 5% in the coming years. I wonder if these corporate practitioners do not live closer to reality than central bankers who continue to pretend that this is not a concern and point to the labour market, where wage increases are not yet about. So that the money tap can be left open and interest rate increases could be out of the question…

But do not central banks play a double role here? Because if you have bought bonds for up to (say) 4000 billion, a 1% interest rate increase could lead to a 300 billion price loss, assuming an interest sensitivity of around 7.5. The losses will have to be borne by the underlying states. States, which were used to adding a profit from their central bank every year and to borrow for ‘free’. But make no mistake: when a state borrows for free, the central bank makes a loss… and the state eventually has to cough up that loss or… borrow again on the capital market!

Back to financial markets which were happy with the reassuring words of the central bankers. After the shock reaction at the beginning of May, stock markets recovered as the month progressed. Even interest rates fell slightly. But something still gnaws: could it really be true that, if the inflationary genius is out of the bottle, one could just push it back into that same bottle? Or are you and I politely being taken for a ride?

Markets still seem to believe it can be pushed back in, but are starting to have some doubts. Economic statistics will be met with suspicion in the coming months. And recent Fed minutes show that there is now a growing minority that wants to turn off the money tap a bit more.

The Netherlands, Germany, Austria and Finland also belong to this group in Europe, partly because they are confronted with their overstrained housing markets. For the time being, however, they are losing out to the southern countries, which are still grateful for the interest rate infusion. And this is where the corona emergency support plan has often not even arrived yet. The first mortgage interest rate increases have already taken place in The Netherlands. Very slowly the net of the market is closing, but politicians and central bankers want the party to go on a little longer.

And what do we do under these circumstances? We have decided to further reduce the interest rate sensitivity of the bond portfolio. We remain 5% underweight in equities for the time being. It is true that (especially) growth stocks can be vulnerable to interest rate rises, but this is often offset by substantial earnings growth due to the increasing economic recovery. So we are careful, but not too careful. We are, however, less than average invested in interest rate sensitive equity sectors.

In the meantime, our fourth Private Debt Pool is under construction: we expect to start with this Pool in the middle of this year, mainly to avoid low or negative government bond yields. We do not run much interest rate risk in this respect, but we do run credit risks on the business community. But we try to spread these as well as possible, over various Private Debt funds, with hundreds of underlying loans.

One of the easiest things to do is to pretend weather conditions are fair when indeed they are. And even if you see clouds gathering, it remains challenging to forecast if and when the rain would start falling down. Economics is not an exact science and investing is not either: models only help you partially. “Look in the Streets,” Keynes said. Perhaps that is what we will have to do more in the near future.

PreviousIf I could do magic…
NextThe final rounds have begun!
Back to overview