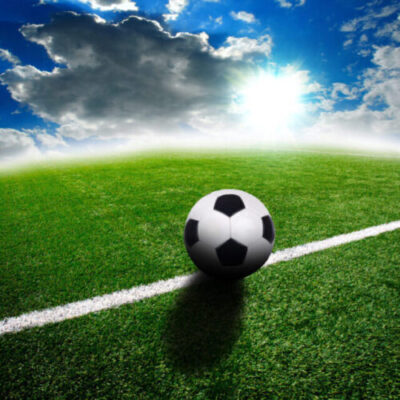 A tour of the pitches

What is the score? Who is scoring, who is trailing or downright failing? These are exciting times. I enjoy the reporting, though mostly from the side-lines.

Who has the most energy?

Surely, the most striking thing in Qatar was Germany’s smooth scoring. They went home quickly with a 15-year gas contract in the bag, starting 2026. Under pressure, everything liquefies, including gas, so this is a nice step towards becoming less dependent on Russia. The Netherlands participate in the construction of terminals to make the gas suitable for northern European consumption. So we also get a piece of the action. Otherwise, the Dutch game is moderate and our score (until last Saturday) rather limited. Those 2 extra nuclear power plants near Borssele will not be operational in 10-15 years. Not of great help in the near future. Even if you have the whole country full of them, like France, if more than half do not work they are useless. France could be a winner, but we do not know about nuclear power yet. It is expensive and complicated, including in terms of waste. So the balance could also tip the wrong way in the long run.

And speaking of balance: in Italy, they know all about that. Recently, the entire Juventus board resigned because they had heavily manipulated the value of players. Typical Italian balance sheet problem, as seen in banking. Juventus wanted to score with it, but forgot the real value of Ronaldo, whom they had acquired far too expensively. Just as Ronaldo thinks he scores more often than he really does….

Furthermore, the US was very briefly a round ahead. After the Russian invasion, it sold shiploads of LNG to Europe, at optimal prices. With its vast oil production, the US was already the world’s number 1 energy supplier. Geopolitical relations have since changed further in its favour. What about the other superpowers? Absent from Qatar, but quietly profiting enormously, are India and China. At huge discounts, they buy Russian oil and gas, which virtually all other countries boycott. Certainly not a setback when you get all that excess energy production at a 25-40% discount.

Norway, although not on the ball, is also gaining on all sides. Stable, calm and reliable. Demand for its gas is far greater than it can supply. Sabotage by Russia lurks, of course. But then again, who should not risk this threat? Even Kazakhstan’s oil is sometimes cut off by Russia.

Then some half time scores, even though it’s seldom quiet in financial markets:

The optimists are nevertheless winning, as we could see in the stock market in October and now again in November. The S&P500 gained almost 6%, although the dollar’s depreciation had to be subtracted. In Europe, prices rose about 7%. Japan lagged behind, although the yen recovered. China, on the other hand, made a comeback after a previous slide. The country contributed significantly to Emerging Markets (EM) 14% recovery. Again, the dollar’s decline has to be deducted.

Perhaps more interesting was the recovery in bond markets: the global Global Agg index rose by as much as 5% and that in EM by over 7%, helped by the decline in the dollar. And that while central banks are only at the beginning of winding down their bond buybacks: both in the US and Europe, about 3-4 trillion of government bonds will go on sale in the coming years…. Therefore, are not we becoming a bit too optimistic about long-term interest rates?

Below is Bank of America’s Bull/Bear market indicator for equities: just a few months back, this gauge was in the red. Back then, a pessimistic market actually offered many opportunities according to this contrarian indicator, and it was right once again. Now this gauge is a lot more cautious, as market participants have become very optimistic.

Has the bear market now finally been defeated by the bulls? Not only has the inflation ghost almost vanquished, but will there be no recession, i.e. without hefty drops in corporate profits? Somehow, the market often seems too optimistic about this. Take a look at the chart below from PIMCO, which tracks estimated and realised earnings trends in the US. While the Bloomberg consensus estimates still assume earnings growth of 6% next year, PIMCO, based on economic indicators and others, thinks those earnings are more likely to fall by 11%. Indicative of a mild recession. 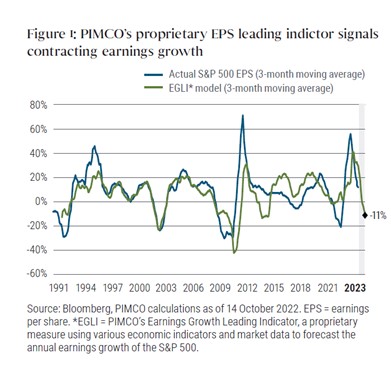 If the bulls really want to qualify for the next round, there may also only be a mild recession, with limited declines in earnings. Otherwise, the bears will win again and both equities and more risky corporate bonds will have to take a step back. The Fed is our referee here: it determines how hard and how long it will have to apply the brakes to curb inflation. In doing so, it also determines how much economic pain must be suffered. The market is eager to play on, but the Fed is worried about the wage-price spiral and would rather see us cool off along the side-line for a while. That is why we are not yet casting off: for equities we are positioned neutral, but for bonds we remain cautious.

December is also supposed to be a month when one takes a breather and enjoy the festive season in the family circle. It may not have been a festive year financially, but we still hope to have avoided most of the damage. So we are firmly positioning ourselves for the new year: a new round with new prizes. More on that in January. We wish you a happy Festive Season.

PreviousBull or bear, who wins?
NextMy 10 New Year’s wishes
Back to overview