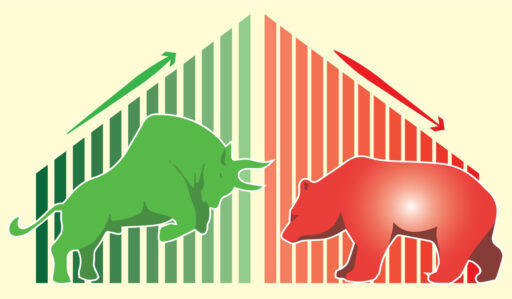 Bull or bear, who wins?

The battle between bull and bear is the familiar metaphor for stock market sentiment. For a long time, bears were on the winning side. Aided by sharply rising inflation and interest rates, stock markets were punished and, above all, downgraded. That was the first phase of the battle, with historically high P/E ratios, especially in the US, returning to more average levels.

The second phase of the battle between bulls and bears looks a lot more challenging. The sharp rise in interest rates and inflation increases the likelihood of a recession. As a result, corporate profits could well fall. In particular, major US Tech companies already showed disappointing results in recent weeks. Nevertheless, expected corporate profits in 2022 have only been revised downwards by about 10%. In a recession, however, these often fall by 20-30%.

How much profits drop in a recession? 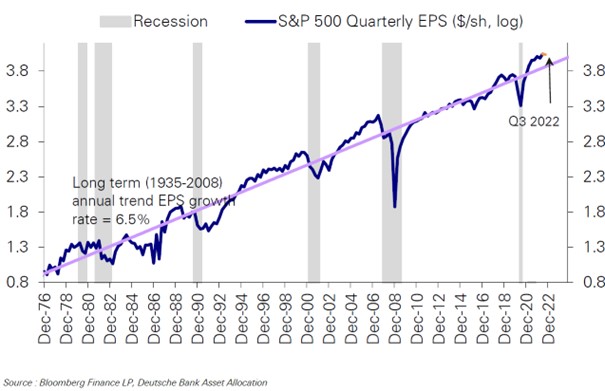 Are we not already in a recession by now? Energy-intensive industries have more often thrown in the towel. Aluminium and zinc smelters, for instance, paid more for their energy bills than their final product would yield. Gardeners, too, often scaled down their production and many a bakery had to close its doors.

Yet there is also something exceptional about the threat of recession. A government, sprinkling money generously, almost worldwide, to especially spare citizens in this malaise of price increases. I wrote to you last month about the supposed free money, which of course does not exist at all. It is simply borrowed. Future generations will have to cough it up, but for now it might help ease or postpone the recession. Besides, the labor market is still tight everywhere. Wage increases can, albeit delayed, ease the pain for citizens somewhat. So companies have to pay, but can they also raise their prices?

Unilever reported last week that it had managed the highest price increase in its history: some 12% in the third quarter compared to a year ago. Nestlé also posted hefty results in that area. Supermarkets apparently had to swallow this. However, not every company makes consumer-essential goods. For instance, quite a few furniture shops have already run into trouble, as the housing market cools down and thus the number moving house and subsequent restyling declines. It is mainly the bigger expenses that consumers postpone. The energy bill has to be paid first.

Price of gas per megawatt hour in euro

Is the energy market still a threat to economic growth? You may know that by now we have a surplus of gas in Europe and the price of gas came down by +/- 60% in recent months. Autumn has become the new summer and our gas consumption was shrinking already anyway. So we are heading in the right direction, although many experts are still worried about the winter of 2023-24. Still, price declines for consumers seem likely during 2023 and that will also mark the immediate end of the sky-high inflation… which stood at 16.8% in The Netherlands in October. The European figure is still hovering around 10-11%.

With this fall in energy prices, will the bulls soon win out over the bears? If so, they need to have the central banks behind them. For now, these are afraid to ease monetary policy too soon. First, the Fed seems to be taking interest rates to 5% next spring. The ECB has started rate hikes a bit later and does not seem to reach an interest rate level of 3-3.5% until next summer. Central banks are particularly concerned that the wage-price spiral has anchored inflation expectations among citizens and businesses.

So the battle between bulls and bears has become one between workers and employers and between businesses and consumers. Who is in the strongest position to keep their income or profits afloat? Central bankers seem to think that a fall in profits is necessary to force companies to lay off workers, thus expanding the labor market and slowing down wage growth. And that it will therefore take them longer to change course and cut interest rates again.

Perhaps knowing the level to which central banks will let interest rates rise is enough for the stock market to take a turn for the better. If markets would know where “the buck stops”, then market participants can adjust their investment plans and the valuation of all their assets. Meanwhile, inflation can then gradually slip back to 4-5% in the US and a bit lower in Europe. That is the soft landing the bulls are hoping for, without a major recession, i.e. without a sharp fall in profits.

What did we do in the portfolio in October? Pessimism was rife at the end of September and prices of both bonds and equities fell sharply. We decided to go against this sentiment in early October, as we did at the end of June, and neutralized our underweighting in equities. We bought mainly global equities. We also took a position in European real estate shares, which had fallen by around 46% this year. That seemed a bit excessive to us anyway.

So now we are in neutral territory, between the bulls and the bears. We still see many pessimistic market participants, who in this rebound – is it another bear-market rally? – may be tempted to hedge their shorts. Without the real conviction though that all the suffering has now really been done.

This is especially true for us in bonds, which rebounded last month. The 10-year yield in
The Netherlands fell briefly from 2.75% to 2.25%, but that seems to us only a temporary phenomenon. Only at 3.5-4% would we want to position ourselves to a more neutral position. For High Yield bonds, with interest rates now around 10%, the situation is different. Here, a substantial buffer is already built into interest rates, if corporate creditworthiness does indeed deteriorate.

In summary, if everyone sees a lot of bears, we are more likely to join the bulls. Right now, we are keeping both at bay for a while. It is never fun to be run over by either herd. From the sidelines, we continue to lurk for opportunities. Call it a passive moment in what may be the most active year of our existence.