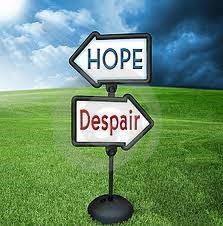 Hovering between hope and fear is often the best times for stock markets. Fear is often a bad counselor, at least for panicking sellers, which we saw at the end of last year once more. For buyers this is often a rare opportunity. And when, one by one, the sting has been taken out of the problems, the situation clears like snow before the sun and indices go up.

However, it is a reluctant rebound of the markets in which investors only participate partially, still (rightly) being worried about some unresolved issues. This is fortunate: assume one didn’t have to worry about anything? In that case there would not be a risk premium built into the market. A good investor wants worries which should, however, be solvable.

In those circumstances we often lean on central bankers and count on politicians. Central bankers appear to have a better feel for the common good than politicians. The latter often have big egos or hold delusional ideas like we see in the Brexit saga, the stability of euro area finances or US trade policies. It mostly takes a bit of time to get some of these eccentrics back into their holes, but success is not always guaranteed.

Entrepreneurs are seldom afraid of central bankers: whether interest rates are 1–2–3 or 4%, chances of success of an investment are far less dependent on interest rates. The pain will only be felt once rates rise to 5–6–7 or 8%. It does however become scary when import tariffs or tax changes interfere with business models. In that scenario one sits on the sideline, a situation which we now see with a lot of entrepreneurs in Europe and Asia.

In the US, the government closed down which hardly slowed the pace growth of approximately 3%.  For weeks now, Trump makes the world look forward to his “Big Deal” with China. I would say, no big deal: Trump just wants any reasonable deal, but that doesn’t mean that trade-deficit issues are easily solved.

The real problem for the US is that it will never become an exporting nation. If you have a good idea, you can launch it in the US with its 350 million inhabitants; in your own language and with your own rules and laws. Why make life difficult and enter the world market with all those different languages, rules and regulations?

Smaller or poorer countries, with cost advantages or the well-known global travelers like the Germans, Japanese, Chinese and also the Dutch, are much better at doing that.

Those cultural differences, also in entrepreneurial spirit, are hard to suppress with some kind of “Big Deal” which will most likely not be very impressive. Apart from what will happen as a result of the Big Deal, for investors the only thing that counts is what has or what hasn’t already been priced into the markets.

Since the start of this year, share prices have risen by 12% in the US, 10% in Europe and approximately 20% in China. Emerging markets also caught up, which is completely justified considering the improved outlook for global trade.

And now over to something completely different. It happens in the UK but the name unfortunately escapes me right now. It starts with a ‘B’. No idea what Big Deal could be found here in such a short notice to create a smooth exit. An extension of the negotiations is becoming more likely unless the EU or the UK would make a surprise move at the very last moment. Meanwhile, Sterling has risen by a few percent, so the market indicates that all will end well. Let’s hope so!

However, once all these worries have disappeared over the horizon, it is slowly time to start worrying again. Imagine if there is nothing to worry about! Without worries euphoria will increase and that is not good. Hopefully the fear will not evaporate all of a sudden, meaning that there will remain some scraps left for you and me and the markets will remain mild and happy.

With this spring wish I greet you, on behalf of the whole team,