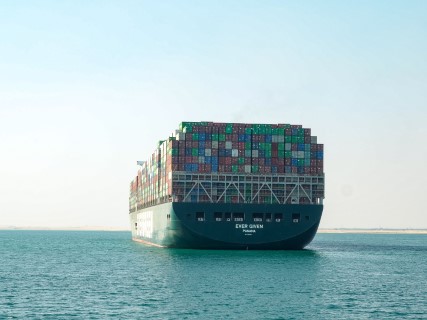 Everything is temporary… even stagflation?

Everything is temporary, but sometimes temporality lasts a little longer. And if ‘everything’ means less pleasant things, such as stalled production and inflation, it starts to gnaw.

“No, sorry, we did not see it coming,” Fed Chairman Powell said last week, “it was not in our models.” We have seen many forms of temporary scarcity by now: from sea containers that got stuck in the Suez Canal (see photo), to computer chips, building materials, furniture, new cars, from personnel in all kinds of sectors, to power supplies and the supply of oil and gas. But our central bankers, who kept printing money, no, they did not see this coming…?

Mrs. Lagarde in Frankfurt also promised to look seriously into any links between wages and inflation, but she had not seen them yet, so she did not act yet. In fact, even if there is quite a lot of smoke coming out of the inflation building by now, it will not be on fire, will it? Nope, so we are still pushing billions of euros a day into the market to pump up that ‘low’ inflation. Last Thursday the latest inflation figure for Germany was released: at 4.1%, its highest level in 30 years. Temporarily, of course….

And it is only when the custodians of the value of money begin to confess their sins that the market becomes restless. All this good news of “transitory inflation” was actually taken for granted. And by now, it has become more complicated so more action by central banks can be expected, starting with the Federal Reserve.

The Fed indicated that the bond purchase program is really temporary and is now openly talking about an interest rate hike in 2022. As a result, bond yields rose again, starting in the US. And the dollar again received an interest rate impulse, which was not the case with the euro. With a rising US$, (import) prices in Europe are getting an extra boost. And oil, petrol and gas will become even more expensive. Temporarily, of course.

There is something ironic in this, by the way, because we no longer want all this oil and gas going forward. But the energy transition has only just begun. And fossil-free is a decent goal, but we still have to build the electrical infrastructure. So far, we have mainly done this for large tech companies such as Google and Amazon, with the construction of data centres, which consume a lot of our (largely subsidized) green energy. In this respect, our own economy is temporarily playing second fiddle.

So we are off the grid, with massive monetary and fiscal stimulus, we are closing as many coal-fired power stations as we can, and we are holding back on gas (with Russia in no hurry with new long-term contracts…), so oil and gas prices continue to rise. Energy companies will surprise consumers in the near future, except in countries where the government has legally limited energy prices. It is striking that this is precisely what happens in the liberal UK: there all kinds of smaller energy companies go bankrupt one after the other. They can temporarily survive a price increase, but if it lasts a bit longer or turns out larger (200%), there is no escape.

A lot is stagnating, but not inflation

The fact that central banks worldwide accommodated house prices to explode as a result of money growth and super-low interest rates has already caused enough social tensions. But now, they seem to have lost control on inflation, with many industries, as far as China, bogged down for a while in the production process. We call this Stagflation, a term that is reminiscent of the 1970s, and with which, according to many, we should not compare the current situation. That makes us cautious towards bond yield risk, not just temporarily, but rather long-term. After all, the risk has increased that central banks are “behind the curve” and have to catch up with the tightening of their monetary policy, in order to prevent inflation from spiralling further out of control.

For equities in developed countries, we remained therefore cautious, but less aggressively underweight than bonds. After our last sale over a month ago, we were 7.5% underweight here. September was not a good month for equities nor bonds: both sank a few percent. Fortunately, the damage was less in Emerging Markets and especially in Frontier Markets (which we are overweight).

Alternatives to bonds still needed for a long time

In the meantime, we have started investing in our Private Debt feeder IV: its profile will be fairly defensive, so it will largely consist of senior secured loans, with a limited weighting towards more entrepreneurial forms of credit. And how temporary will our investments in Private Debt structures be? That could take quite a while. Not only because such investments are illiquid and take 6-10 years to pay back, but also because it can take a long time before the ordinary bond markets have become sufficiently attractive to invest in.

The world is opening up ever more and we are slowly learning to cope better with the pandemic. Many experts warn us that Covid will not be a temporary phenomenon, but will stay with us longer. Hopefully it is not some kind of growth-suppressant, with higher prices, because one really does not want stagflation, not even temporarily for that matter. Before you know it, you will be stuck with it for much longer than you believed all along.