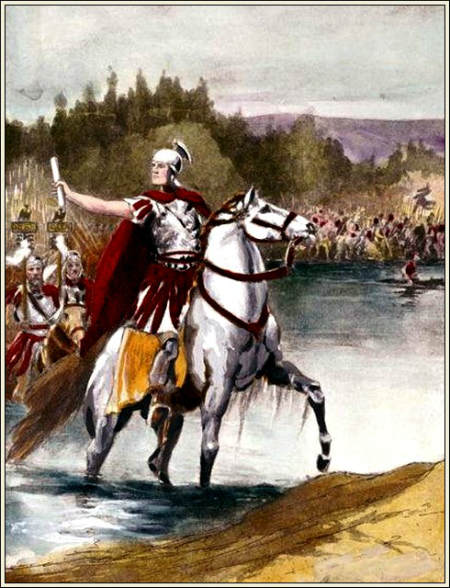 The die is cast

Europe has really crossed the Rubicon. About 2000 years after Caesar did. And even now there is no going back: once you enter into debt together, you cannot just go back. The Rubicon separated the wealthy Northern Italy from the part where Rome held sway. The relatively rich European north has now really crossed that border to the poorer south. An important flaw of the Euro has been repaired. We have not only become a monetary union, but also a transfer union. This paves the way for a fiscal union: not just common expenditures and debts, but also more common taxation. This is a sine qua non for the stability of a monetary union. Finally, the third and necessary condition for the success of a single currency beckons, political union. Such a Federal States of Europe requires a federal European administration, with a federal Ministry of Finance, a federal parliament with real powers and a federal president with serious power. Besides, of course, this federal taxation. It now seems too early for this far-reaching transfer of powers, but the step that has now been taken is of great significance.

So a boost for the euro, which was also accompanied by statements from the Federal Reserve pointing to longer-term monetary easing. In anticipation of these developments, we moved to an underweight position in U$ in the first half of July. With the result that we now have a relatively large Euro-exposure as we anticipate that the currency can move more towards its purchasing power parity (approx. 1.30) over time. But not in a straight line, although it may look like it these days. It will be a volatile ride, as usual with currency movements.

We have thus entered a new playing field. The obviousness of a strong dollar and a weak euro has given way to healthy doubts. More and more parties will ask themselves whether generous holdings of US dollars, Swiss francs and Japanese yen as the traditional flight currencies/safe havens during Euro weakness, are still necessary and desirable.

At the same time, the falling dollar has an impact on investment and operating results. Although the American stock market – mainly under the influence of a further growing tech sector – itself rose by 5% in the past month, the dollar fell just as much in value against the euro. There are quite a few strategists who argue that European equities should benefit from this dollar weakness. This was not really the case in July and when one considers how much is exported from Europe to the US, I am not surprised. A falling dollar results in a lot of calculating work by stock analysts: which company exports a lot to the US (and thus loses turnover in euros) and which company has many branches in the US (decrease in personnel and operating costs). Conversely, large American exporters now get much more valuable euros back when they sell their products here. And they have to dig deeper into the pockets for the staff and factories here. Experience shows that analysts initially underestimate these types of effects. But when writing this newsletter we were around 1.18, so things can go fast. At the end of June it stood at 1.08.

In the meantime, the second wave of the corona virus is of course also playing a role in market sentiment. On the one hand, it will not have helped the dollar, because things are not going very well in the US. On the other hand, US tech stocks with their online economy seem to offer a kind of hedge against the risk of lockdowns and slowdowns in physical economic activity. Now that working from home is increasingly taking on a structural character, the hardware is very sought after. The recent figures from Apple speak volumes.  At the same time, large parts of the old economy run the risk of slowing down again: shops, the travel industry, aviation and the catering industry. In view of the price levels achieved on stock exchanges, we therefore reduced our equity positions a little further at the beginning of July. We did this mainly in equities from developed markets. The declining dollar, on the other hand, is giving Emerging Markets some breathing space since much of their debt is denominated in dollars. We therefore remained overweight in EM debt paper as well. And speaking of debt paper, High Yield bonds also had a good month: the interest surcharge over government bonds fell further for a monthly result of over 3%.

Meanwhile, Trump is waging a kind of cold war with China, probably mainly to boost his profile towards the elections. For the same reason, he also needs a new stimulus plan for the American economy. After some haggling with the Democrats some sort of support plan will most likely be forthcoming in the next few weeks. The budget deficit in the US will again explode in 2020 to about 18% of GDP, an outrageous number that will receive little or no attention. Although borrowing seems virtually free to most wealthy countries, the debt pile it created really has to be paid back at some stage. It cannot be parked indefinitely with central banks. There is not much attention paid to this subject as long as central banks keep buying the debt.

There comes a point, however, when this will stop: this is when the Federal Reserve and other central banks are satisfied with the cyclical recovery they have achieved with their fiscal and monetary stimulus. The weakened dollar will by then have caused increasing import inflation and the issuance of new government bonds will break all records. By then investors will start to take a more critical approach to this extremely lenient policy. Perhaps a 30-year bond rate of 1.5% will no longer fit. And when interest rates will eventually start to rise, the litmus test of American monetary policy will follow: does one dare to raise interest rates or are the monetary ‘doves’ that now populate the Federal Reserve convinced that inflation is only of temporary nature and that money will continue to be more or less free for a long time ? This will be the next major die to be cast, although it still seems a long way off.

Now we will continue to live between hope and fear:  hope is pinned on a vaccine, while fear of a return to lockdowns and a slowdown in economic activity are real. It is above all doubt, the uncertainty that keeps paralyzing economic decisions and is affecting both consumer -and business confidence. (example: there is still the threat of a hard Brexit, although this hardly makes the headlines). It also explains our relative defensive positioning at the moment which in part is  the result of stock market price levels reached.

In the meantime, we hope that you are spending your summer vacation more or less undisturbed. Now that one can travel to Central Italy again these days, one could, just north of Rimini, cross the Rubicon entirely by oneself and hopefully without direct consequences!

PreviousFirst the sweet, then the sour
NextRobin Hood: dream or reality?
Back to overview