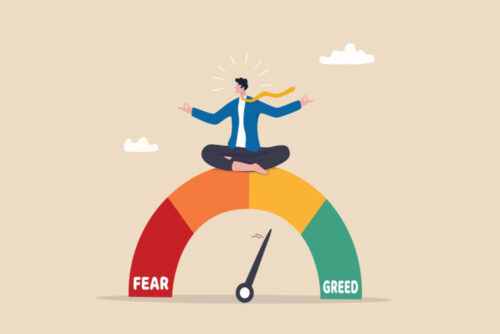 In our previous newsletter, I wrote about the widespread fear of a recession, which scared off many investors and caused stock prices to tumble. We were of the opinion that such negative stock market sentiment was a bit exaggerated and decided to buy more back shares again. In doing so, we neutralized our underweight position, which we had built up since November last year.

Last month, recession fears did not subside much, interest rates fell sharply and stocks rose by about 8% worldwide and had their best month in years. Towards the end of July we sold shares again. Although we see some bright spots, there are still plenty of concerns. So much optimism all of a sudden is probably also a bit exaggerated.

Let’s start with the bright spots: strangely enough, these are mainly due to the fear of a recession: commodity prices, especially metals and oil, but grain as well, became cheaper. Although we are not yet sure how stable we should take the deal between Ukraine and Russia, because immediately after this successful UN mediation, cruise missiles landed on the port of Odessa again. Anyway, all in all, inflation expectations were considerably tempered and the rise in interest rates on the bond market quickly gave way to  interest rate declines.

10-year interest rates in the US and The Netherlands since 1 January 2021, with the corresponding inflation data

Where the fear of interest rate hikes was once still huge, now several market parties started to speculate on a possible end to the monetary tightening by the Fed. In fact, after a further rise in interest rates, a rate cut was quickly priced in. You know, markets love rate cuts, if only they do not go hand in hand with recessions. And recently, Fed Chairman Powell indicated that he did not expect a recession. That fed the positive sentiment all the more and so we got a very happy month of July.

Where the fear of interest rate hikes was once still huge, now several market parties started to speculate on a possible end to the monetary tightening by the Fed. In fact, after a further rise in interest rates, a rate cut was quickly priced in. You know, markets love rate cuts, if only they do not go hand in hand with recessions. And recently, Fed Chairman Powell indicated that he did not expect a recession. That fed the positive sentiment all the more and so we got a very happy month of July.

But how justified is all this inflation, interest rate and recession optimism? Let’s start with inflation: after the 9.1% in the US, a new inflation record of 8.9% was set in Europe at the end of July. Gas prices in particular added to the misery after Putin turned off the gas tap a bit further. Putin cannot do without European money entirely, but he apparently wants to sow as much fear as possible. And with success! In one year, European gas prices increased roughly tenfold.

Next are groceries in the supermarket. Unilever stated last week that the average price increase of its products was 11% year-on-year in the second quarter and that more price increases are coming. That will not be much different for the other food companies. Rents in the private sector rose by 11% in The Netherlands over the past 12 months, I noticed. In addition, wage demands are increasing just about everywhere.

And what did the ECB do? It raised the interest rate from -0.5% to 0. Pooh, pooh… and this with an average inflation rate in Europe of 8.9%. The Netherlands briefly recorded 11.6% inflation for July. The fall of the euro to about parity with the US$ plays an annoying role in this: about half of all products in the world are settled in dollars. As a consequence, we import more and more inflation when the euro weakens.

This fall in interest rates does not seem sustainable

So should we be impressed by the recent fall in long-term interest rates from 2.2% to 1%? The ECB still has a lot of work to do (including in Italy), even if inflation were to fall back to 4-5%. I therefore see it more as a market fluctuation than as a serious return to the almost 0 interest rate, which we have had for far too long. We are therefore not going to buy government bonds at these levels. We continue to focus on (alternative) fixed income products with mainly short maturities.

And much more importantly: yes, there is now technically a recession in the US, because the American economy also shrank in the second quarter. Corporate profits rose mainly in the energy sector. Outside of that, they did not go up much. The Fed raised interest rates again by 0.75%, to now 2.25-2.5%, and seems determined to curb inflation. The rise in housing costs (owner-occupied and rental housing) remains particularly worrying and accounts for about 1/3 of the core inflation in the US, which currently stands at 6.9%.

What is the neutral interest rate level in the US?

The Fed seems to indicate that 2.5% is a neutral interest rate level for the US economy. So that an interest rate of 3-4% could have a tightening effect? But how credible is that with now that inflation is hovering around 9% and the core CPI is close to 7%? I fear that the Fed will have to raise interest rates much further, to above 4%, before it dares to give the signal ‘inflation mastered’, although no one knows exactly how quickly inflation will drop from 9% to 4-5%. We just do not have enough data to support this. But we do not have too many reasons for screaming optimism, especially as long as the war continues.

Is Europe already almost in recession? In Germany, Europe’s most important economy, growth is now officially stagnating. Here, the gas problem is most acute and prices continue to rise. Southern Europe benefits greatly from resurgent tourism. All in all, we have not yet entered a recession. But stagflation remains a certainty for the time being.

So we were cautious when markets remained too optimistic, we bought back shares when markets kept falling and now we have slowed down a bit after the recent strong rebound. We no longer see interest rates falling, but think that central banks will continue their tightening policy globally and interest rates will resume their advance. Price-to-earnings ratios in stock markets may suffer from this, not to mention corporate earnings, which are sensitive to a recession. Whether it will come and how much it will hurt, is difficult to predict. But it seems too early to pretend that everything is back to normal.

PreviousRecession fears
Back to overview