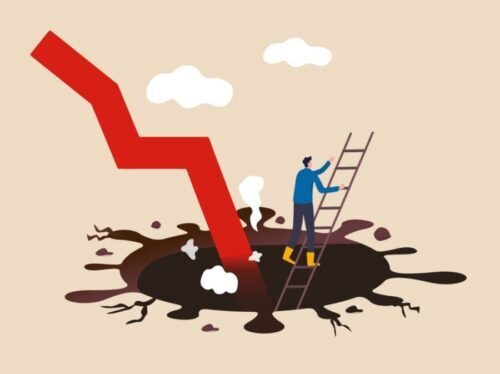 “There is a hole in my bucket, dear Liza, dear Liza”, was a well-known song from my childhood. Politicians are urging central bankers to really do something about the devaluation of money. They just had their most important meeting of the year, in Jackson Hole, Wyoming. It is also called the annual camping trip for the chief central bankers, but this time it was not so much fun. The song, often sung at campsites, will not have cheered them up. The central bankers cannot close the gap that inflation has created in the real disposable income of the population without causing another problem. Because if they raise interest rates any further, a recession is imminent.

And let us face it: if energy costs, which normally make up about 10% of household spending, quadruple, then the other 90% of spending must become about 30% cheaper to keep inflation down to 3%. That, of course, will never happen quickly, even if you were to raise interest rates. No, Putin cannot be fooled. We must ensure that this ridiculous increase in the price of gas is short-lived. But how? By becoming less dependent on gas and by using less of it on a structural basis. In The Netherlands, gas consumption fell by 25% in the first six months of this year. In Germany, too, a substantial reduction was visible. If it is necessary, it turns out to be quite possible. Filling up our empty storage capacity also turned out to be quite easy, although we did pay the premium price. And so, at the end of August, the price of gas fell for the first time.

The same cannot be said for the price of electricity. The European drought and the lack of hydropower, which we had hoped to import from Norway, are taking their toll here. At least as important is the poor track record of the French nuclear reactors, which often supply its neighbors. Therefore, Germany may keep its last three nuclear reactors running for a while. The Greens will not wholeheartedly support this, but neither do they want to be held responsible for the stagnation of Europe’s largest economy.

Meanwhile, coal-fired power stations, also in our country, are working overtime and we have ended up in the opposite world, where the government wants to get us through the winter with energy subsidies and energy tax cuts. That is how big the loss of purchasing power has become (almost 9% in Germany in August and over 13% in The Netherlands!). Hopefully, we will keep sufficient incentives to really keep saving energy, because only if we manage to limit the demand for energy ourselves, can we parry Putin’s chess game.

But not all inflation comes from the war and galloping energy prices. The same central bankers have also put too much money into circulation. A lot of money, for which not enough goods and people could be found immediately. So, products became more expensive, and wages went up faster. Last month the number of vacancies rose again in the US. So, you can only solve this lack of supply by slowing down the demand. And that is exactly what central bankers will do now. Not only will interest rates continue to rise, but some of the bonds bought up over the years will be put on the market.

Bond traders will have to get used to this: the one excessively big buyer will now be a noticeably big seller. Also, in Europe where the ECB will still intervene in the Southern bond markets if the rise in interest rates becomes too worrying. In the meantime, the bond market resumed the rate rise of earlier this year. See below the graph with the 10-year interest rate for Dutch government bonds.

Equity Index All Countries World in Euro since 1 January 2021

Then to the stock market, which did not want to believe that central bankers were serious about fighting inflation. For a few months, stock markets seemed invincible, but in the end, Fed President Powell punched a big hole in it in Jackson Hole: even if inflation were to fall from now on, he declared, the Fed would continue to conduct a tight monetary policy, just to be on the safe side. He was prepared to accept declining economic growth (read: a recession).

We had already shaved off some of the equity positions at the end of July and did so again at the end of August. In bonds, we still see no reason for optimism. We are still counting on Private Debt and alternative fixed income investments such as factoring and consumer loans to get us through the winter. With infrastructure investments like gas and electricity plants of course, and wind and solar parks. Although we are not able to deliver this energy directly to our clients. That still happens through dividend payments.

Nevertheless, if a yawning energy gap remains for The Netherlands, but especially for Europe this winter, we are left with the not so pronounced alternative of renewed gas extraction from that enormous hole under Groningen. That is not fun, but we had better be honest with the Groningers: even if we have already bought enough gas ourselves, we cannot leave our European neighbors, the Germans in the lead, out in the cold.

And so, we prepare ourselves for the winter, with also an economic downturn. The best gift we could receive, but for which there is no immediate prospect, would be an end to the war in Ukraine. That would be a colossal hole in 1, which would prevent a much further tightening of monetary policy and create a very favorable market sentiment. Fewer guns and more diplomats. Something like a UN peace mission and even a ceasefire.

Let us keep that hope, however vain it may be at the moment.

PreviousChange of sentiment
NextFree money does not exist
Back to overview